Third day of writing, and I felt like reflecting on my personality - picking out the stuff that I think is related to ADHD.

This is far from an exhaustive list. I just told myself to write for like, twenty minutes. 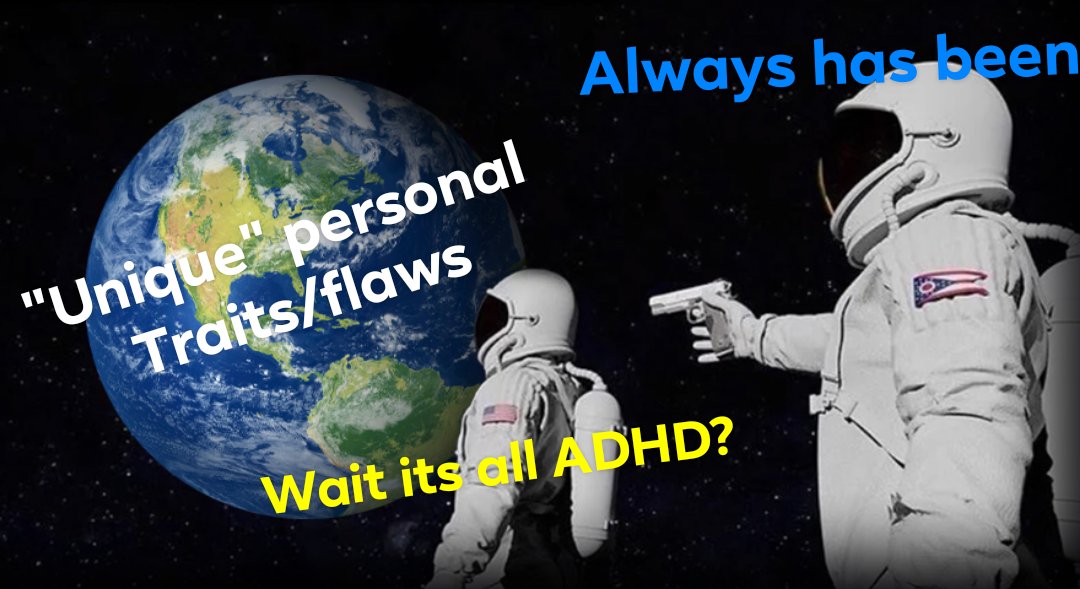 Background:
Smart kid.
Kid who "just needed to apply himself more".
Kid who took things apart that he should't be taking apart.
Kid who got into trouble for arguing with authority figures.
Kid who got into trouble for his jokes in class.
Kid who got inconceivably frustrated when things he did weren't immediately perfect.
Kid who always felt a little bit alien, even before he internalised the innocent labels - "dreamy", "space cadet", "eccentric".
Kid who felt like he's missing scripts for social stuff that everyone else seems to have.
Kid who can't get up before 10am.
Kid who can't fall asleep before 3am. Kid who never gets enough sleep.
Kid who needed to present his work better.
Kid who outdid predictions anyway.
Kid who never did his homework, but could hyper-focus on - in retrospect - really really boring programming stuff.
Kid who grew an affinity to computers from an early age.
Kid who really, really struggled with mathematics.
Kid who was told he'd need maths for what he wanted to do.
Kid who only ever had/has the vaguest idea what he wants to do.
Kid who got two first-class degrees in computer science regardless.
Kid with explosive emotions.
Kid who learnt later than others how and when to have a filter.
Kid who is clumsy, forgetful, vague, shy.
Kid who was quite happy acting and playing solos in national music competitions anyway.
Kid who mixes tenses.
Kid who wears fluorescent bright clothes at festivals and raves.
Kid who absolutely did not give two shits how he was perceived when excited enough by something.
Kid who was incredibly sensitive, anxious, self-conscious and who "needs to
stop being so hard on himself".
Kid who walked home without his shoes when he lost them between lessons.
Kid who had more doodles than notes in his textbooks.
Kid who inadvertently covered his hands in ink.
Kid who chews his inner lip, bites his nails, clacks his teeth, tenses muscles, twitches legs, impercetibly as to not be told off for fidgeting.
Kid who destroys pen caps by just being near them.
Kid with a high IQ, but a low 25th percentile score in the RBANS tests for Delayed Memory.
Kid who has his own place, has been working a stable job for 6 years, keeps relatively tidy - but still feels like daily life is the Trial of Sisyphus.
Kid who has three times: "now", "in a minute", and "infinitely far into the future".
Kid who, when asked, can't remember what he did today or yesterday.
Kid who, when not prompted, can recite an entire Simpsons episode from the Conan O' Brien era 90's episodes.
Kid who eats fast.
Kid who walks fast.
Kid who is paradoxically both incredibly observant and unobservant at the same time.
Kid who really, really needs external structure, comfort and support.
Kid who doesn't want to be fucking told what to do, stop pressuring him, he'll do it his own way damnit, and stop being patronising.
Kid who is acutely aware of his paradoxes.
Kid who gets by, by writing lists.