Today, I returned from my medication hiatus. My day has been one of productive, ordered calm, so it's probably a good time to write about medication for the benefit of my future self.

Since my diagnosis in mid February, I've been taking a low dose of stimulant medication. Other than good sleep, good exercise and good food, stimulant meds are the first line of treatment for ADHD. You probably know about some of them - Adderall (amphetamine/dextroamphetamine). That's the one that's known for its abuse potential. Although, on a tangent - those who "abuse" it are usually American college students or young professionals who take it because they believe they need to have an edge on their competition, pressured to be at top performance by a society that values capital over human welfare. Grumble grumble. I assume that here in the UK we have the same issues, but certainly when I was in uni nobody was really talking about adderall, especially not to deal with deadlines or exam revision. (We just got drunk instead.) 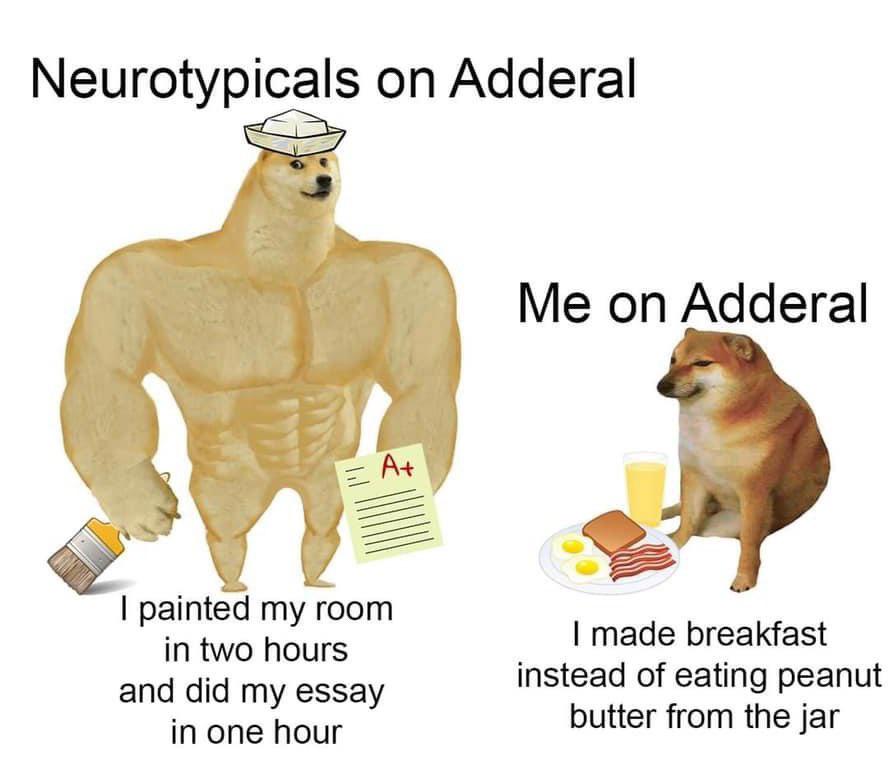 The stereotype of the super-powered person rushing around on adderall being super productive is a curious one to me, as is the fact that stimulant meds are supposedly highly addictive substances. For one thing - they may not actually have much of an effect on neurotypical individuals. Secondly, I've been on this dangerous, highly controlled, addictive substance for about 9 months and I routinely take days off despite it being a medication designed to be taken every day, and I am still on the lowest therapeutic dose available. I don't crave it on the days that I don't take it.

Perplexing stigmas aside - it really does make a difference. I'm currently alternating between Concerta XR (an extended-release brand of methylphenidate) and Elvanse (lisdexamfetamine). Both take about 30 minutes to kick in, and last for around 12-13 hours, so taken once a day before I've even woken up properly. I'll probably settle on Elvanse, having had the chance to test both - but what dosage and what drug and what release profile suits someone is highly individual. Turns out I'm quite sensitive to stimulants, so I'm quite happy staying on the lowest dose (18mg-20mg of both) - even though the therapeutic dosages go all the way up to ~70mg/day. I set an alarm, 30 minutes before my "real" alarm goes off, take my meds, and by the time the "real" alarm hits, it's starting to kick in.

It feels like a more laid back version of coffee - barely raises heart rate, but gives me a motivated feeling. I notice that I am more likely to do things when I think of them, rather than "I'll do that later". I find it easier to do a bunch of things in parallel. Subjectively, I feel like I simultaneously slow down but also speed up - I do things more efficiently. I feel like it becomes easier to talk and have ad-lib conversations and express myself on the fly. On my medicated days, I can become a lot more organised, able to keep myself on task, calm and collected in my thoughts, able to keep more things in working memory, able to put things in order better. I feel more "rewarded" for doing all the Bullshit But Invariably Self-Care Chores. One time, I was actively enjoying ironing.

Plenty of people describe their first time trying medication as their "Ah-ha!" moment - "is this what it's like to be functioning normally!?" But for me, it was more like a series of subtle "huh," moments, where I noticed some small way in which I was doing better. My favourite moments were when I was running or going on walks, and noticing that, for brief moments, my brain was quiet. Being able to actually just be in the present moment felt really new to me, and it's really nice when it happens. 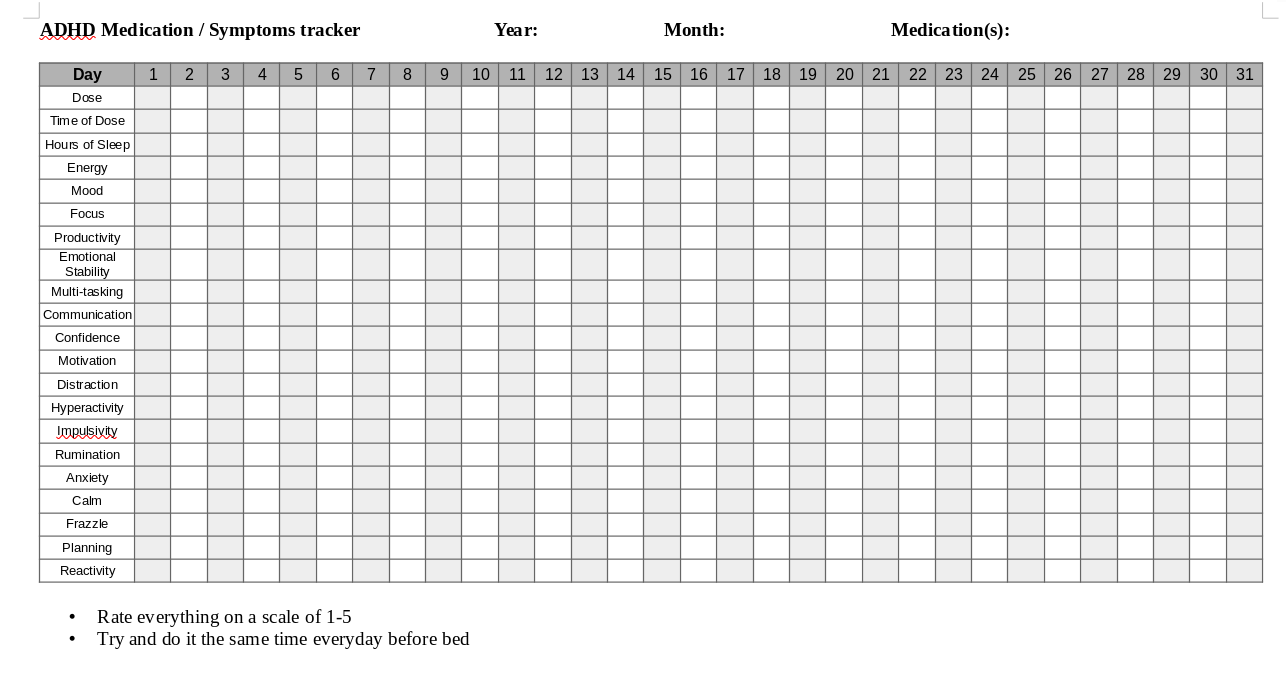 When I first started taking them, I designed myself a chart to track what effect the meds were having on my symptoms. It's really subjective and only makes sense to me - but my hope was that if I plotted my scores I'd be able to correlate an upwards tick in good things and a downwards tick in bad things on medication days. I never got around to properly plotting the data, but there was some trend. 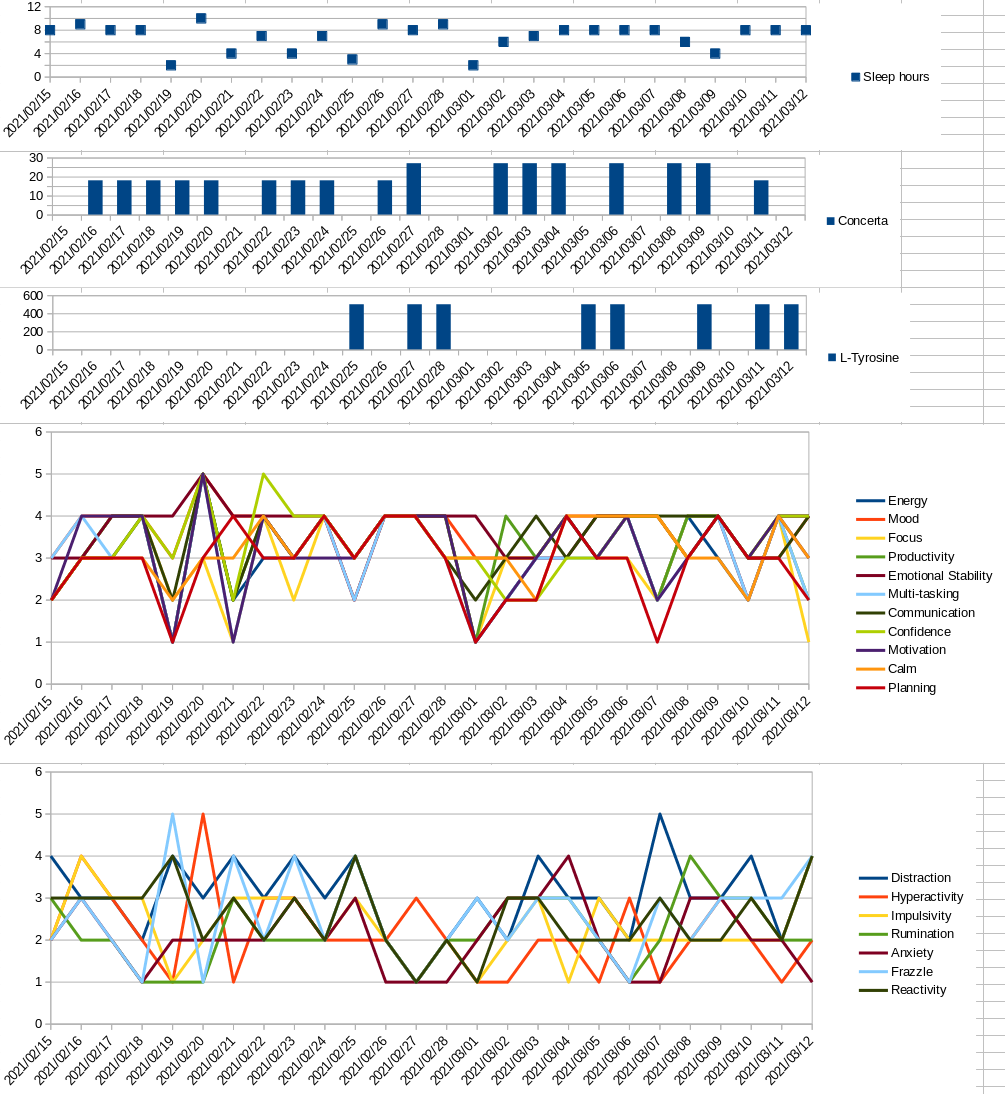 After the first month or so I stopped tracking it on the chart as I was confident that subjectively the meds were having a positive effect on my focus and motivation. What I really wish I had though, was a proper objective test I could do every day - like a few brain training games on a phone app, that would give me an objective score about, say, how good my working memory was that day.

After the first couple of months, the meds started to blend into the background and I developed a bit of a tolerance. The initial side effects (dry mouth was a big one for me, though that was it really) had dwindled away, but it felt like it was having less of an effect. So I upped my dose a few times and tried taking it every day. Then I learned how much is "too much" for me. The dark side of stimulant meds is: getting stuck doing tasks, as opposed to not doing them. Like, hyper-focusing on work, to the detriment of my free time. I also found that I felt a bit "zombie-like" some days - just kinda... Numb. When it wore off, I felt more impulsive. It felt like I'd been using up extra dopamine reserves and I was a bit fried.

Took a step back, went back on to the lowest dose, took rest days again, and crucially, got better sleep. Turns out that I am very sensitive to sleep too, and the meds don't do much if I'm not well-rested. Unfortunately, stimulant meds can also make it harder to fall asleep - especially the extended-release ones I'm taking. I'd not really appreciated that at the time. It's not something I've solved; but I'm annoyingly naturally insomniac anyway and the meds don't increase that much. My current solution is over-the-counter Promethazine, an antihistamine which can be used to induce drowsiness when taken near bedtime. It's not a long-term solution, and it's something you can build up a tolerance too also, so taking some every other day, so I have a reasonable amount of days in the week where I sleep like a normal person.

(As an aside, I tried altering my circadian rhythm with melatonin supplements for a while, but they just made me wake up earlier - didn't help me feel sleepier earlier in the night. Cool room, darkness, no blue lights at night, meditation, chamomile tea, exercise in the day, no caffeine, weighted blankets -- tried all that, but Asshole Brain still wants to stay awake until 4am feeling bored without chemical intervention)

So, after 9 months, what do I think of the meds? They are great - in moderation. They really do help, but I need to appreciate that of utmost importance is sleep. I'll continue taking meds; it becomes quite obvious on the second or third day off them when I'm back to my baseline self, how they had been helping.

I'd be interested to try the other non-stimulant medications around, like Strattera (atomoxetine), but for now I think I'll stick with Elvanse for a while - maybe like a year.